Saratoga Plan led a community-wide effort on Saturday, June 30, to begin removal of an invasive outcropping of water chestnut plants on Fish Creek, the outlet of Saratoga Lake. The event kicked off at 8am on Saturday morning, with over 36 volunteers in attendance. Prior to the boat launch, Capitol Mohawk Partnership for Regional Invasive Species (PRISM) provided information about the invasive species as well as a tutorial on the proper procedures for water chestnut removal. Kayak Shak generously provided boats for those in need. 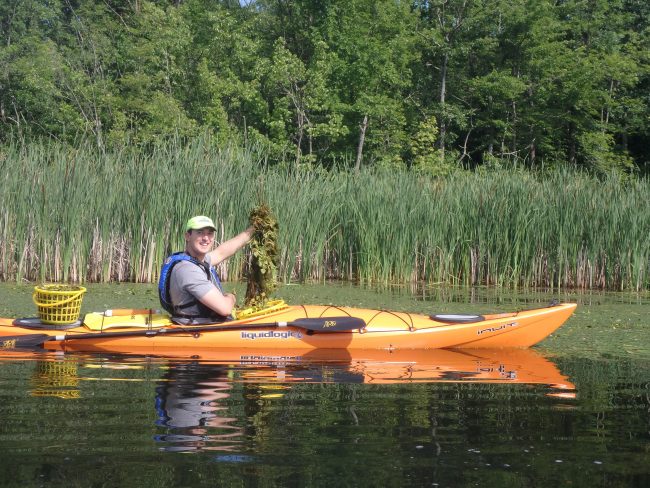 “This creek is a real gem,” said Kayak Shak owner Beau Stallard. “We’re really excited that PLAN is teaming up with us to protect it.”

Greg Redling, Saratoga PLAN Stewardship Coordinator, said, “It was great to get so much help protecting this beautiful resource, and everyone agreed we should do it again soon.” He added that another water chestnut pull is being planned for August.

After launching from the Kayak Shak, the volunteers took a 20-minute paddle out to the site of the infestation. At the end of the pull, the participants enjoyed healthy snacks of fresh fruit, yogurt and granola provided by Mountainman Outdoor Supply Company. Hundreds of pounds of water chestnut biomass was removed during the pull. The Saratoga Rowing Club and Skidmore Rowing Club aided in the safe and legal disposal of the biomass, gathering it on the Saratoga Rowing Club docks before disposing of it in the Skidmore compost.

It was important to target the specific infestation of water chestnuts because of its early stage in maturation when it is easier to eradicate it. In many other local areas, the invasive species is so well established that management consists only of reduction, rather than total removal. This is a major problem that is spreading throughout the Adirondacks. However, if water chestnut pulls occur a few times a year on the Fish Creek site over the next decade, the threat could be entirely mitigated.

This was truly a community-wide effort with representation from individual volunteers, businesses, nonprofits, education institutions and club organizations. All participants can recognize the many values of Fish Creek and the importance of maintaining its character. By eliminating invasive species, we improve the quality of Fish Creek, which in turn, has impacts on native wildlife flourishment, property values and recreational opportunities.

We thank our partners Kayak Shak, PRISM, Mountainman, the Saratoga Rowing Club, the Skidmore Rowing Club and all of our independent volunteers for sponsoring this successful event. For further information on combating invasive species in the capital region, we recommend consultation with Capital-Mohawk PRISM. We look forward to participating in further efforts to continue preserving the beautiful landscape we depend on and enjoy.