Victory, NY - Saratoga PLAN to host ribbon cutting ceremony for the new Saratoga Siege Trail, located in the Village of Victory off of Route 4 on Saturday, October 17th at 1 pm. The event is free and open to the public and will begin at the Schuyler House with brief words from project supporters and leaders, followed by a ribbon cutting and .5 mile trail walk. 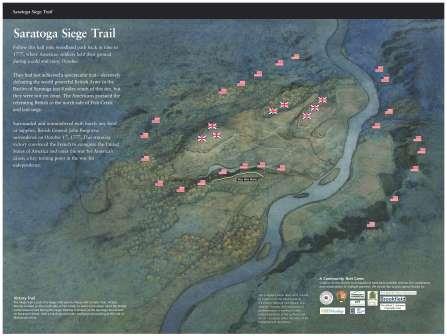 Just 8 miles north of the Saratoga battlefields an incredible siege took place along Fish Creek. After several days of being surrounded and starving, British General John Burgoyne was forced into surrendering on October 17th, 1777, an act that ultimately convinced the French to recognize the United States of America and join them in their battle for independence.

“Saratoga PLAN has been honored to work with many partners on this project that has built a public historic interpretive trail along the very same section of Fish Creek where the Americans laid siege,” says Devin Rigolino, Stewardship Coordinator for Saratoga PLAN. “It is our hope that the new Saratoga Siege Trail will draw and educate visitors for years to come. Thank you to everyone involved in making the creation of this trail a possibility.”

NEXT  DEC Celebrates the Completion of the Reroute of the Spruce Mountain Trail and the Opening of the Rehabilitated Fire Tower
PREVIOUS « NYS Agriculture & Markets: Saratoga PLAN completes farmland protection projects in record-setting time