A hardy group of more than 50 trail enthusiasts braved rain, wind, and high water on Saturday, November 3, to cut the ribbon at the new entrance to the Bog Meadow Brook Nature Trail in Saratoga Springs. The reopening culminates a season of trail renovations including the creation of a new spur trail at Meadowbrook Road, extended bog bridging to avoid wet areas, extensive raising and smoothing of the trail surface, numerous drainage improvements, and new additions to prevent flooding caused by an active beaver population. The trail had been closed since last spring while the renovations were underway. 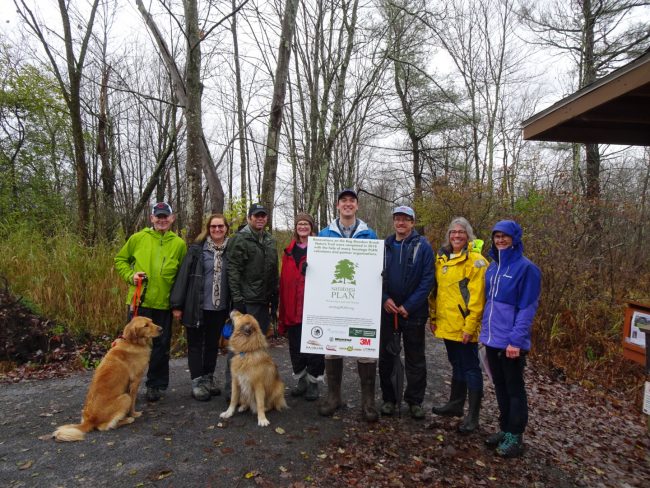 Many volunteers who worked on the trail attended, along with representatives of business partners, the City of Saratoga Springs, and Saratoga PLAN staff.

Renovations were partially paid for by a $30,000 grant from the New York State Department of Environmental Conservation’s Conservation Partnership Program, administered by the Land Trust Alliance, by $10,000 from the City of Saratoga Springs, donations from the 3M Company and Stewart’s Shops, discounted materials from D.A. Collins Companies and Curtis Lumber Co., equipment from TRAK Equipment Rental, and lots of labor and engineering from Munter Enterprises and Foothills Tree Service.

“This community is so fortunate that its citizens are willing to invest their time and talents to plan, build and maintain trails,” said Maria Trabka, Saratoga PLAN’s Executive Director,” as she read off the names of the many volunteers, companies and funders who contributed to the trail project this year. “Geoff Bornemann, who is not present today, has been out here on the trail several times a week – for the past 25 years! – keeping it open and a pleasant experience for all. And seeing so many of you here on a cold, rainy morning to reopen the trail bears witness to our active, enthusiastic local trails community.”

Saratoga PLAN Stewardship Coordinator Greg Redling said, “PLAN sought the expertise of a professional to help design and install two beaver deceiver flow devices: one near the new section of bog bridging, and one under the bridge over Bog Meadow Brook. These devices provide a beaver-friendly method of controlling water levels while still preserving valuable wetland habitat.” Redling also noted that due to extensive beaver activity the trail will require ongoing maintenance and further upgrades, which are already being planned.

The Bog Meadow Brook Nature Trail was developed in 1993 by the Saratoga Springs Open Space Project (now Saratoga PLAN) in cooperation with the City of Saratoga Springs. The path travels along the path of the abandoned Saratoga & Schuylerville railroad that once connected the city to various locations throughout the Northeast. The land surrounding the trail corridor is referred to as the Meadowbrook Preserve.

At the reopening, Barbara L. Glaser, one of the founders of the Open Space Project, explained how the trail got started 25 years ago and was cleared and surfaced by volunteers every Saturday morning. Many of the original trail builders were in attendance at the reopening on Saturday morning. John Munter, who helped build the Bog Meadow Trail 25 years ago and was instrumental in rebuilding the trail this year, emphasized the need to integrate maintenance into community projects at the outset. Glaser and Munter were the official ribbon cutters to reopen the trail.

The Meadowbrook Preserve, which encompasses 174 acres of wetlands and woods, surrounds the trail, working to protect the watershed where maple, ferns, meadowsweet, and evergreens are commonly found. The majority of the Meadowbrook Preserve was donated to the Saratoga County Land Conservancy (now Saratoga PLAN) in 1988 by the Anderson family, with an additional parcel donated to PLAN in 2006 by Belmonte Builders and Bonacio Construction.

The entire Meadowbrook Preserve is owned and maintained by Saratoga PLAN, and the Bog Meadow Brook Nature Trail is owned by the City of Saratoga Springs. The Route 29 section of the trail, which is part of the improvements this year, will eventually become part of the Saratoga Greenbelt Trail and the expanding interconnected countywide trail system. Jackie Hakes, Chair of PLAN’s Board of Directors, coordinates the Countywide Trails Committee that works to build a network of trails connecting communities across the county. In her remarks, Hakes focused on the progress being made across the county to build what could become an alternative transportation network for citizens and how it will enhance the area’s potential as a world-class destination for visitors.