feast of the fields returns for 13th year

The 13th annual edition of Saratoga PLAN’s Feast of the Fields will return to Saratoga National Golf Club on September 20. The event, likely to sell out to 600 guests, features farm-fresh produce, meats, and dairy products from a wealth of local farms, transformed into amazing culinary treats by well-known local chefs from regional restaurants. Feast celebrates the bounty of agriculture in the Saratoga region, which remains strong partly due to Saratoga PLAN’s farmland conservation efforts. Funds received support land conservation. 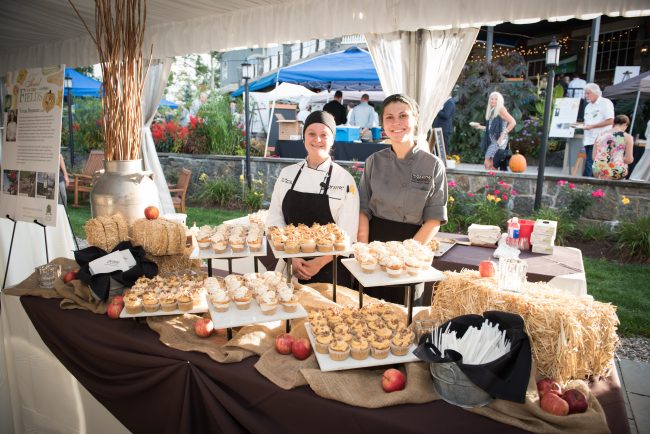 Michelle Hall, Saratoga PLAN Feast coordinator, said, “Thanks to lots of hard work and endless planning, our staff and volunteers have once again created the premier farm-to-table event in Saratoga.” She added, “We expect to sell out, so we encourage people to get tickets while they are still available.”

For 2018, Saratoga PLAN welcomes 10 chefs, including some familiar faces, and some exciting new masters of cooking farm-fresh food. Each one brings a unique and creative style, but they all believe in using the freshest and highest-quality local ingredients.

Several of the farms providing fresh ingredients have been permanently conserved by Saratoga PLAN. A complete listing of farm suppliers is available on the PLAN website at: https://www.saratogaplan.org/blog/farms-of-feast-2018/

DeCrescente Distributing Company is graciously providing a wide range of local brews, wines, and distilled beverages, and there will be local ciders, juices and other drinks.

Music will be provided by the Hot Club of Saratoga. A silent auction and raffle feature great products and experiences donated by local establishments. This year’s raffle is for a top-end fat bike, which will help burn off some of the calories consumed.

Tickets may be purchased online at www.saratogaplan.org, by calling 518-587-5554, or just stop by PLAN’s office in Saratoga Springs. A portion of the ticket price qualifies as a tax-deductible charitable contribution.

NEXT  Botany Tea Celebrates Nature
PREVIOUS « Feast of the Fields 2018