Saratoga PLAN, the land trust of Saratoga County, presented awards to seven Conservation Heroes on December 1st at the Featherbed Lane Farm, in the Town of Charlton, before an audience of enthusiastic supporters of land protection. 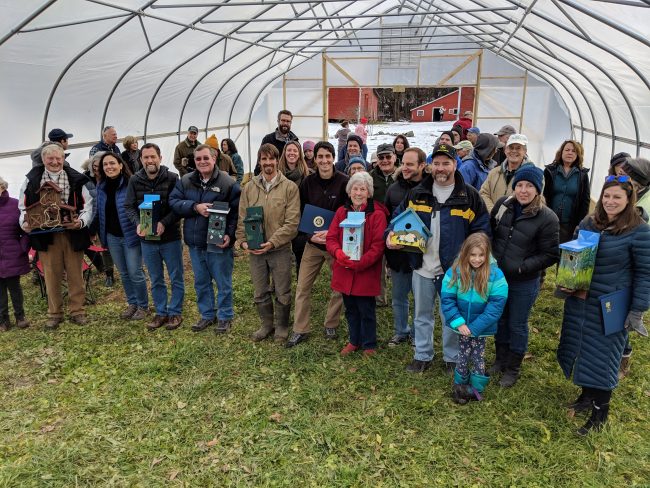 Conservation Hero awards are given to very special people or entities that have contributed in an extraordinary way to the conservation of Saratoga County’s landscape. Conservation Heroes are recognized for their volunteer service for their communities and/or for conserving important farmland, wildlife habitat, water resources, or outdoor spaces such as parks and trails for public access.

The seven award recipients were honored for helping to protect the values of their land for future generations.

Wayne Wood received his award for conserving 220 acres of a multi-generational farm located in the Towns of Northumberland and Saratoga on land where the Battle of Saratoga was fought, which now nurtures crops, timber and heifers.

Shirley Bold accepted her award for herself and her late husband, Jim Bold, who were instrumental in laying out conservation priorities in the Town of Halfmoon, and who put a conservation easement on their property to allow public access so that future generations could enjoy nature as they have.

Geoff Bornemann, who was unable to attend, received an award for almost singlehandedly maintaining the Bog Meadow Trail in Saratoga Springs since it was opened 25 years ago.

Larry Woolbright was honored for his longtime leadership of the Friends of the Kayaderosseras, and for spearheading a campaign to find a conservation solution for the 300-acre Boyhaven Scout Camp in the Town of Milton.

John Munter Sr., who helped build the Bog Meadow Trail, was honored for a lifetime of engineering and construction leadership on many local conservation projects. He recently purchased the Boyhaven Scout Camp in order to provide time for the state and the Town of Milton to work out a conservation solution for the land.

Local Farms Fund, represented by Kevin Egolf and Tim Biello, was honored for its mission to help farmers attain access to affordable farmland. Appropriately, the site of the awards ceremony, Featherbed Lane Farm, was purchased by the fund, and will eventually be sold at an affordable price to farmer Tim Biello and his wife Jamielynn.

In presenting the awards Saratoga PLAN Executive Director Maria Trabka, said, “Conservation Heroes tend to be rare individuals who can see beyond themselves to their community, beyond their land’s boundaries to the larger landscape, and beyond their lifetimes to future generations. Conservation Heroes tend to be humble people who see themselves as temporary stewards of their properties for the short time they are privileged to serve as its caretaker.”