On February 22 Saratoga PLAN, the land trust of Saratoga County, finalized perpetual conservation easements on three adjacent scenic and productive farm properties in the Town of West Charlton, totaling more than 405 acres. Landowners Dawn and Dorothy Szurek sold a conservation easement on two farms of more than 315 acres, and Gary and Anne Vanderhorst sold an easement on an adjacent farm of close to 90 acres. Saratoga PLAN will steward these actively farmed properties in perpetuity, preserving open space, productive farm and forestland, and providing scenic enjoyment for all. These properties bring PLAN’s total of conserved lands in the county to about 4,985 acres. 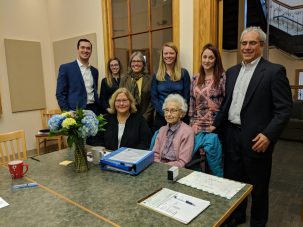 Dawn Szurek explained her love of the farm where she grew up: “Driving the tractor, you’re looking at the views.” Dorothy, Dawn’s mother, added that they wanted to keep the land in farming in order to honor her late husband, John M. Szurek’s, legacy. “It’s really to protect it for the future,” added Dawn, noting that her father built up the farm through hard work and sound conservation practices, for which he received an award.

Saratoga PLAN Executive Director, Maria Trabka, said, “We are so grateful to the Szureks and the Vanderhorsts for preserving their productive farms forever, and for helping to feed our growing population while maintaining West Charlton’s scenic beauty for the public to enjoy. Three West Charlton farmers – Dave Wood, Jay Anderson, and Jason Arnold depend on the Szurek and Vanderhorsts’ fertile soils to grow feed for their dairy and beef operations and to sell to other local farmers.”

The Szureks said they will use a portion of the proceeds to help improve the farm. Dawn said that West Charlton is very “ag-friendly,” and she has received a lot of support from the community. The New York State Department of Agriculture and Markets provided partial funding through a competitive process to purchase the conservation easements and pay for the transactional costs of the projects. PLAN’s Conservation Director, Mike Horn, added that PLAN is currently working on seven more farmland conservation projects, which will add more than 1,100 acres to the conserved land total in the county. Horn said that those interested in protecting their farmland should attend one of PLAN’s Farmland Conservation Workshops coming up on March 19 and 22.