Sandy Whitesell was born in 1950 in Ann Arbor, Michigan, and her husband, John Wolfe, grew up in Burnt Hills, New York. Together the two purchased 105 acres in the town of Galway, New York in 2003, and enjoyed hiking and observing nature around the property. 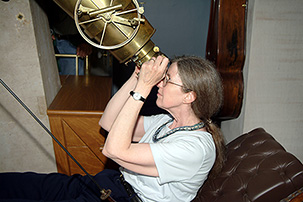 Sandy worked at the University of Michigan from 1973 until she fell ill in 2005. There she received extensive academic and professional honors, and was instrumental in the restoration of the Detroit Observatory, the oldest unaltered building extant on the campus. She was appointed inaugural Director and Curator and helped create a museum within the Observatory, and even wrote a book about the project.

Since Sandy’s death in 2006, after a long and courageous battle with cancer, her legacy has lived on in Michigan as far as historical preservation goes. Now another form of preservation has taken place, gracing Saratoga County in her honor.

In 2013, in memory of Sandy, John placed a conservation easement on the property so that the land and wildlife within that she loved in such a visceral way would remain conserved and safeguarded for the enjoyment of future landowners.

John Wolfe describes the execution of the conservation easement with Saratoga PLAN as simply the fulfillment of the plan that he and Sandy had made together more than ten years ago, stating that there is “still every reason…to follow through on our plans for conservation” and that Sandy “would be proud of the conservation of her property.”