For thirty years, Jim and Christine McKnight has a dream to conserve their 63-acre patch of forested land in Northumberland, and in December of 2010, Saratoga PLAN acquired the property from the McKnights, opening it to the public two years later in 2013. 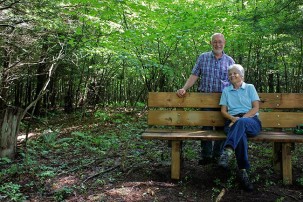 Conservation has proved very important to Jim and Christine McKnight. Christine came to Saratoga County from a small town in Michigan, and Jim is originally from the City of Memphis, Tennessee. With Christine’s summers spent on a small freshwater lake, and Jim spending time on his family’s houseboat on the Mississippi River, the two of them came together with a similar appreciation for open space.

After working for much of their lives, Jim as a photographer for the Associated Press and Christine in the marketing department for SUNY Albany, they are both now retired. The McKnights bought the 100-acre property that is now known as the Coldbrook Preserve when they were in their twenties after moving into a 150-year-old farm house down the road where they raised their two children. For them, the woods just down the road were a place of retreat. Their children, Jim III and Katie, have fond memories in the thick forest along the stream. The two are both in their 30s now and married.

In April of 2013 the McKnights officially opened the 64-acre Coldbrook Preserve with the help of Saratoga PLAN. They are very thankful for the local pride in the Coldbrook project, as friends and neighbors came together in a public/private partnership overseen by a non-profit.

Christine states, “Our thinking was that we just don’t want to see this [land] developed. Our number one reason was preservation. And our number two was as an investment for our children.”