Bob and Barb Thomas had a lifelong love affair with the out-of-doors that they shared with their four sons, taking them camping and canoeing in the Beartooth Mountains, Yellowstone and Glacier Parks, and in the rivers and lakes of New Jersey and the Adirondacks. They all gained an intimate knowledge of spectacular landscapes, which they loved sharing with others. 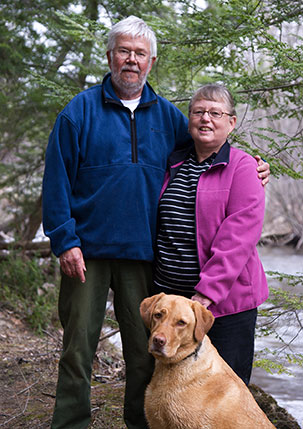 Bob Thomas grew up in the tiny hamlet of West Branch, NY, along the Mohawk River, which he fished throughout his childhood under the tutelage of a great-uncle; he grew into an avid angler. His childhood experiences in nature drew him to the study of meteorology at NYU, and then to weather forecasting in South Carolina, Newfoundland, Montana, New Jersey, and Albany, NY. Barb grew up in New York City close to the Queens/Nassau border, where she witnessed urban sprawl in its infancy. She was a Girl Scout until she graduated from high school, and then a camp counselor every summer throughout her years at Queens College.

When Bob transferred to the Albany WFO in 1971 the family bought a house in West Milton, New York. Throughout their years in West Milton, the adjacent land to theirs, which ran down to the Kayaderosseras Creek, was vacant and used by area residents. When that land came up for sale in 2006, the Thomases finally had the chance to buy it. They have since kept the 13 acres along the creek (now known as the Kayaderosseras Creek Preserve) undeveloped by donating it to Saratoga PLAN, whom they have entrusted to carry out their wishes for the land in perpetuity. Simultaneously, the Thomases also placed a conservation easement on an additional 7 acres that adjoins their donated land.