Did you know that these species, known for their beauty, are harming the environment and economy? 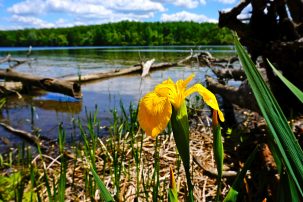 Deceivingly delicate and welcoming in appearance, the yellow flag was introduced to the U.S in the 1700’s as a form of erosion control. Unfortunately, their unruly growth continues to out-compete native plants, lowering plant diversity in a given area. And, they’re toxic! Yellow flag can harm humans, livestock, and other animals that consume them. They grow in marshes and stream banks and grow to be 1-3” in height, flowering from May-June.

The Mute Swan was originally brought over to New York from Europe in the 1900’s for its aesthetic appearance. But it does more than sit and look pretty. This waterfowl out-competes the many native species above and below water by eating massive amounts of vegetation. Though elegant in appearance, the mute swan scores low in personality points. Mute swans are extremely territorial and violent, known to attack humans and non-motorized boats. As a result, their nests lessen property values and can limit profit expected from water-based recreational activities, given people do not want to swim with waterfowls that attack them.

Want to make a difference?

To prevent the spread of yellow flag, pull them when you see them. Make sure you are wearing gloves so you do not come into contact with their toxins. Mute Swans are protected under the Department of Environmental Conservation (DEC) so do not harm the swan, eggs, or their nests. Instead, contact DEC. If you see these species, you can report them to NYmapinvasives.org.