We are excited to announce that on April 17, 2019, Saratoga PLAN completed its largest farmland conservation project to date. Four hundred sixty-four acres of the Barber Bros. Dairy Farm in the Town of Northumberland is now conserved in perpetuity. The purchase of development rights was made possible by funding from the NYS Department of Agriculture and Markets and a partial donation by Linda Barber and her son, Chad Barber. What began in 1939 as a small farm run by two brothers selling eggs and offering custom field work, Barber Bros. has developed into a successful 1,200-acre dairy farm, currently supporting a milking herd of 650 cows. 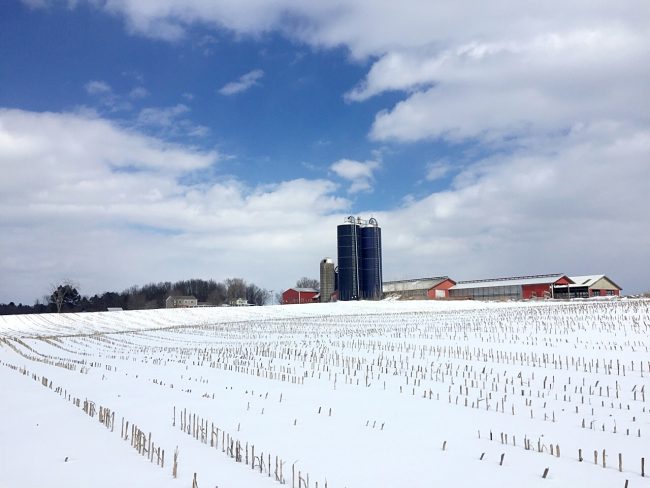 With a conservation easement in place on nearly one-third of the farm, Linda Barber, the female force behind the Barber Bros. Dairy Farm operation for the last 50 years, can finally begin to enjoy views of her property without fear of encroaching development. “I don’t want to sit in my rocking chair and look out the window and see something else there. I want to look and see my fields and the trees,” she said with smiling eyes and a laugh, although she’s not retiring from her bookkeeping responsibilities just yet.

The idea to conserve their farmland originated with the Barber’s late neighbor, Lyle Purinton, who conserved a portion of his land but unfortunately passed away before completing the paperwork to bring the remainder of his dream to fruition. After winning the bid to purchase Lyle’s land in order to increase their own adjacent farm’s acreage, Linda, her late husband, Clint, and son Chad, also latched onto the dream of protecting the land in perpetuity.

In 2016 Linda and Chad approached Saratoga PLAN about the possibility of protecting a third of their cropland. Three years later, they recall their initial hesitation about what seemed like an enormous undertaking, and shrug it off. “Working with Saratoga PLAN has been perfect. I wouldn’t have gone any other way,” Linda remarked.

“If it wasn’t for Saratoga PLAN, we wouldn’t have been able to complete the conservation easement.”

Before the ink had even dried from signing Phase I of the Barber Bros. Dairy Farm conservation easement, Chad and Saratoga PLAN’s Conservation Director, Mike Horn, were deep in conversation about the options for Phase II to bring more of their farmland under conservation.

Saratoga PLAN is looking ahead, too. With five more farmland protection grants from the NYS Department of Agriculture and Markets and Saratoga County in progress, PLAN aims to conserve over 600 acres of productive farmland in the months ahead in Saratoga County.

Saratoga PLAN preserves the rural character, natural habitats, and scenic beauty of Saratoga County so that these irreplaceable assets are accessible to all and survive for future generations. To date, the organization has protected over 7,000 acres of land and 200 miles of trails. By helping municipalities and landowners identify and accomplish their conservation goals, Saratoga PLAN (preserving land and nature) is a proven, effective leader for sustaining a quality and healthy place for all. The desirability to live and locate in businesses in Saratoga County is evident. Not only does the county have the fastest rate of population growth in New York State, but land is being converted for development at five times the rate of population growth. Saratoga PLAN helps to balance that growth with land conservation. PLAN has completed 9 farmland conservation easements in 2018-2019, protecting 1,300 fertile acres that will always be available to feed future generations.