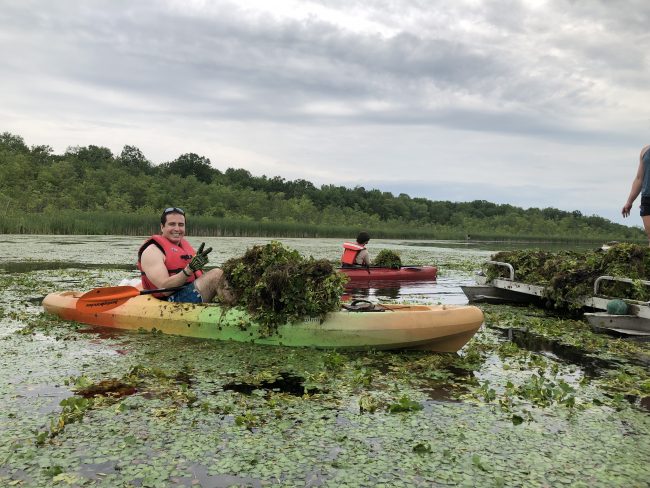 The result? An estimated 120 cubic feet of harvested invasives. That’s equivalent to 4.5 hot tubs or 20 bathtubs full of water chestnuts.

During the kick off event on June 29, volunteer Cole McMordie, spoke slowly and in disbelief as he untangled himself from a heap of water chestnuts he had pulled aboard his canoe, “It’s just so crazy, the water chestnuts grow so quickly. There’s so much of it, and it becomes unmanageable and chokes everything else out.”

Saratoga Rowing Association rower, Christian Sauer, was volunteering with a dozen other rowers that train on the creek almost daily. “This water is going to be here long after we’re gone, and I want to make sure future generations can enjoy it,” he said.

Volunteers continued pulling on weekday mornings and evenings throughout summer, putting a significant dent in the plant’s invasion of Fish Creek.

Water chestnut is an aquatic invasive plant that made its way into the northeast in the late 1800s from Europe. It spreads rapidly by seed in shallow, freshwater lakes and ponds, forming dense floating mats that can negatively impact the environment, economy, and recreational use of the area.

The inch wide seeds grow underwater and have four extremely sharp points, which can injure swimmers and other shoreline visitors, including animals. The plant’s thick coverage on the surface of the water limits light penetration, significantly decreasing native aquatic plant growth, and its annual dieback results in low oxygen levels and potential fish kills.

Saratoga PLAN is incredibly grateful for its volunteers and their evident commitment to conservation of our natural spaces.

Big thanks to the Kayak Shak which graciously donated kayaks, paddles and personal flotation devices to volunteers in need of the gear.