Saratoga PLAN is proud to announce the arrival of our 2016 Annual Report: A Changing Landscape. With the rapid growth and economic development in Saratoga County the need to "Preserve Land and Nature" is greater than ever, and Saratoga PLAN is up to the challenge. The 2016 Annual Report highlights the many initiatives PLAN completed in 2016, along with the capacity building steps that will support service needs in the future. 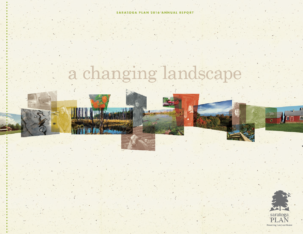 In addition, the report outlines PLAN’s strong financial position, and the many contributors and supporters who made our success possible are recognized. PLAN is on track to conserve another 1,777 acres of land in Saratoga County on 10 farms and three other natural areas worth a total of about $7.4M, covered by New York State grants and county, town, and private donations. Other highlights include the securing of two new trail connections for the Saratoga Greenbelt Trail, extensive planning and work in the Palmertown Range Conservation Area, and ongoing work improving access and signage on existing trail networks at the Hennig Preserve, portions of the Champlain Canalway Trail, and on the Hawkwood Estate. A special group of volunteers works on PLAN’s 10 preserves and 24 miles of trails to make them welcoming to the public for hiking, birding, cross-country skiing, snowshoeing, paddling, education, and artistic pursuits.

Read all about it in PLAN’s 2016 Annual Report!